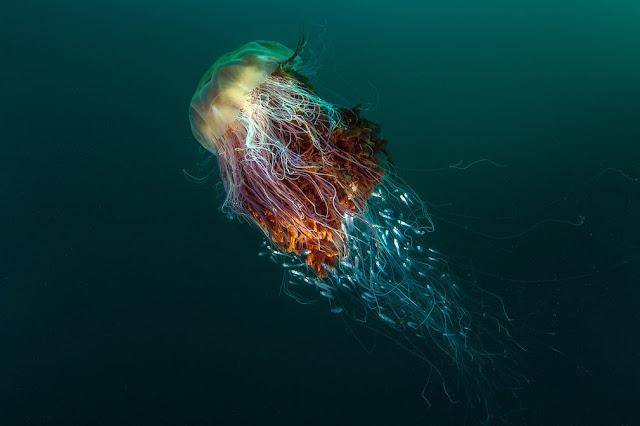 This image, taken by George Styles, is the overall winner of the 2016 British Wildlife Photography Competition and was taken at Saint Kilda in the water off the island of Hirta, Scotland.  It captured a Lion's mane jellyfish.
at October 29, 2016 1 comment: 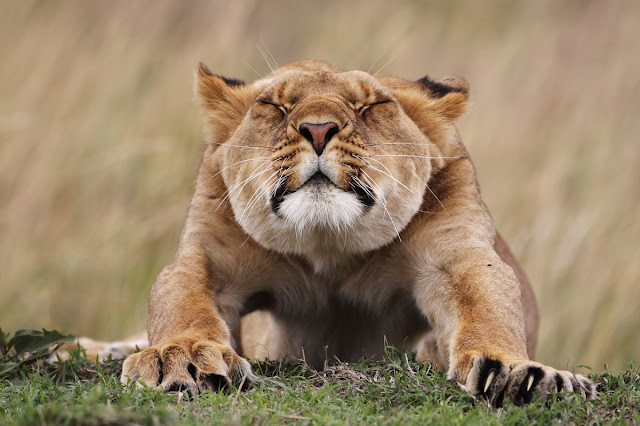 Email ThisBlogThis!Share to TwitterShare to FacebookShare to Pinterest
Labels: Lions

This image won Hermann Hirsch the GDT Nature Photographer of the Year 2013. 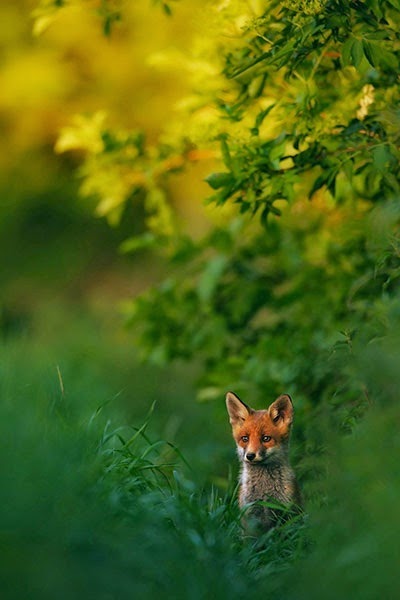 Email ThisBlogThis!Share to TwitterShare to FacebookShare to Pinterest
Labels: Foxes

This image, titled Red Fox, was photographed by Alannah Hawker of Surrey, England. It earned a commendation in the Animal Portrait division in the 2014 British Wildlife Photography Awards competition. 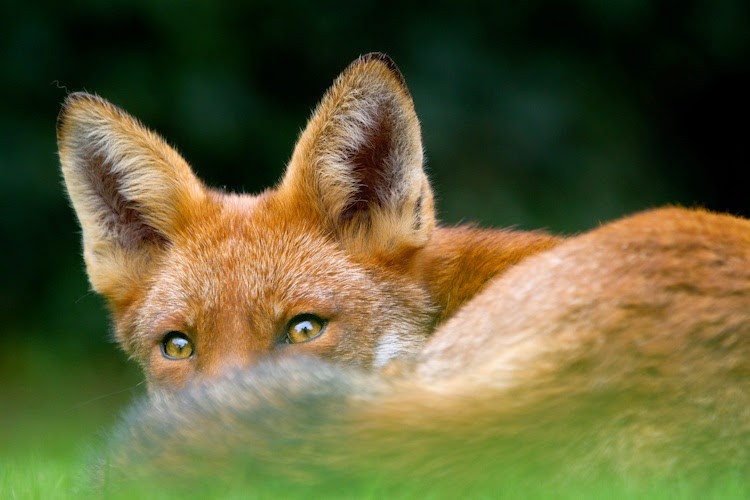 Email ThisBlogThis!Share to TwitterShare to FacebookShare to Pinterest
Labels: Foxes 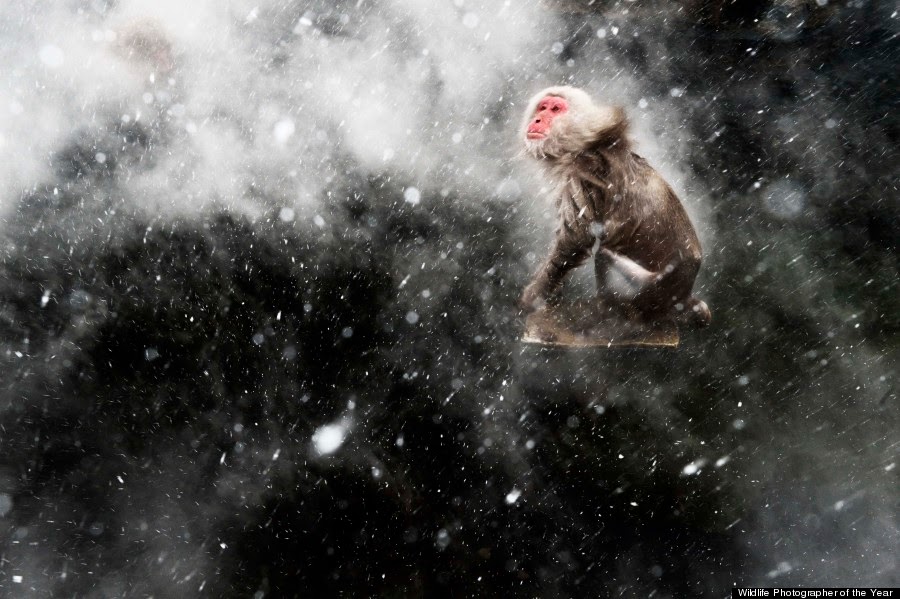 This surrealistic image was captured by Jasper Doest, winning the 2014 BBC Wildlife Photographer of the Year; WINNER: Creative Visions.

Doest caught this image as a blast of cold wind blew over the hot springs of Jigokudani, central Japan, where the Macaques like to warm themselves.  The cold wind hits the hot steam rising from hot pools, creating fantastic effects.
at February 10, 2014 No comments: 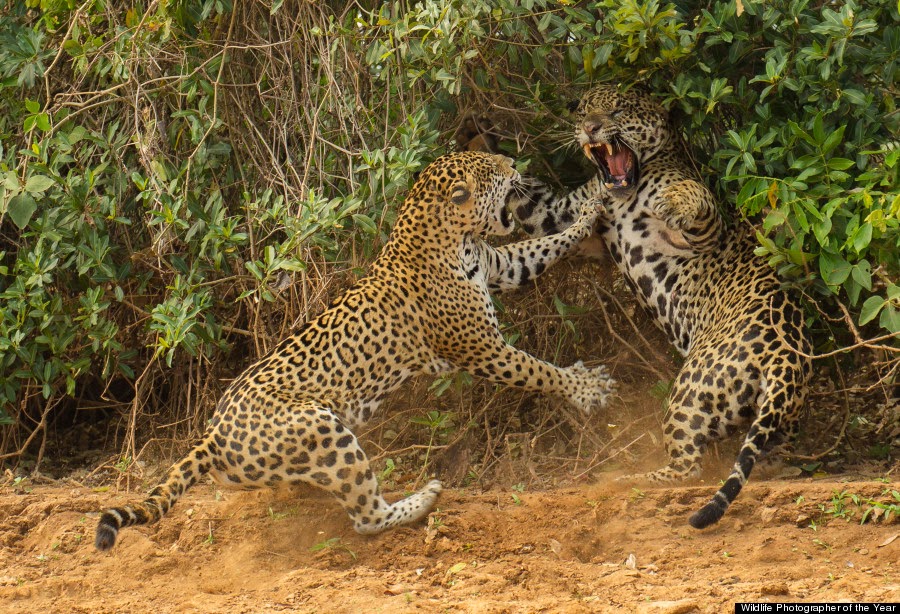 This image brought the Joe McDonald the 2014 BBC Wildlife Photographer of the Year Award; WINNER: Behavior: Mammals McDonald captured this image on the banks of Three Brothers River in Brazil’s Pantanal.

The story behind the photo is as follows:  McDonald and others were in a boat off the riverbank when a female jaguar (left) emerged from the brush and went to the river to drink.  Soon after, a male emerged, drank and approached the female.  She attacked and backed him into the brush, but soon after, both disappeared into the jungle together to continue to mating dance.
at February 10, 2014 No comments:

Email ThisBlogThis!Share to TwitterShare to FacebookShare to Pinterest
Labels: Jaguars 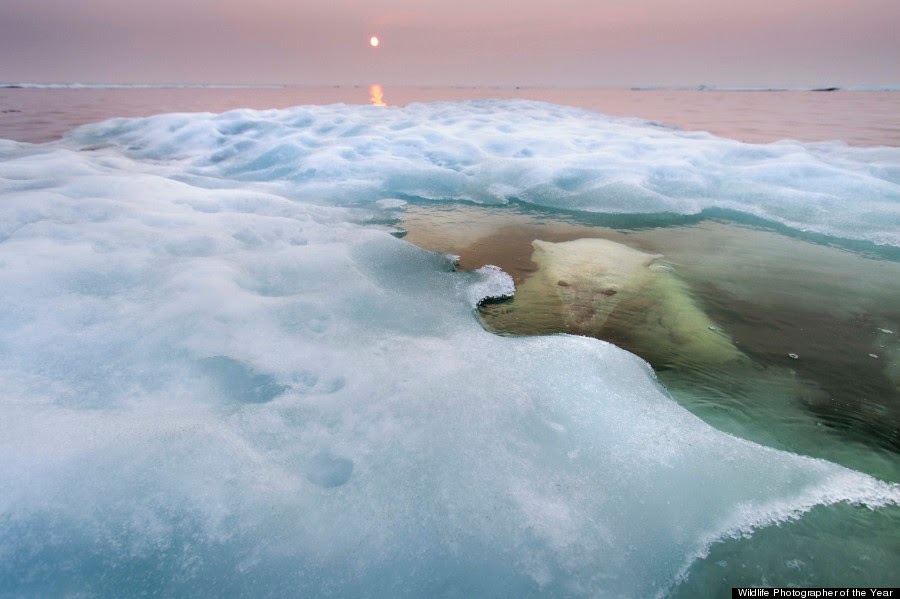 Paul Souders wins the  BBC 2014 Wildlife Photographer of the Year: Animals in Their Environment award , for this eerie image of a polar bear swimming around ice.  Taken 30 miles off the shore of Canada, it took Souders 3 days to scout for the shot.

The biggest challenge facing Polar Bears today is the Arctic warming which limits their territory.  The melting polar and glacial ice from global warming is making it more difficult for them to hunt seals, which are their main food source.
at February 10, 2014 No comments:

This image, taken by George Styles, is the overall winner of the 2016 British Wildlife Photography Competition and was taken at Saint Ki...